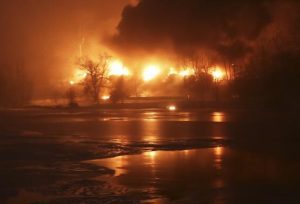 Disaster on the Kanahwa River in West Virginia is another example of a rail system not able to handle highly volatile Bakken crude oil transport. 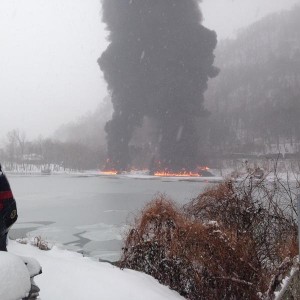 On Monday afternoon, a train hauling Bakken crude oil derailed along the Kanawha River in Fayette County, West Virginia. Twenty of the cars caught fire and a home was destroyed. There are reports that cars continued to burn yesterday and an unknown volume of oil has leaked into the Kanawha River. West Virginia Headwaters Waterkeeper Angie Rosser is responding to the disaster, with support from Waterkeeper Alliance.

“Our thoughts are with the residents of Fayette County and the first responders as they deal with this explosion and toxic oil spill. While one home was damaged, many people evacuated and drinking water supplies impacted, thankfully no one was seriously injured,” said Betsy Nicholas, Executive Director of Waterkeepers Chesapeake. “Incidents like this one are yet another warning that our entire region is at risk. Our rail systems, suffering from years of delayed maintenance, were not made for this highly volatile cargo.”

According to CSX, the train consisted of two locomotives and 107 rail cars and was traveling from North Dakota to Yorktown, VA, the same rail line that runs through Lynchburg, Virginia.  All of the oil cars were the CPC 1232 models, the presumably upgraded tanker cars that are “safer” than the outdated, inadequate DOT-111 cars. These newer CPC 1232 also derailed and exploded on the James River at Lynchburg in April 2014.

“This dangerous event could have happened on the James River again,” said Pat Calvert, Upper James Riverkeeper. “This is the same rail line that runs along hundreds of miles of the James River and through many population centers in Virginia. This is an alarming reminder that our river and communities continue to be at risk every day without stronger safety requirements for Bakken crude oil transport. Increased inspections of the lines carrying this highly volatile material are vital to the safety of Virginians and the James River – a key drinking water supply for millions.”

The number of tanker cars traveling through towns and cities and along rivers has increased exponentially due to the Bakken oil fracking boom in North Dakota. The number of tanker cars on U.S. rails jumped from 9,500 carloads in 2008 to 415,000 in 2013, according to the U.S. Department of Transportation (DOT). The Congressional Research Service reported that 258,541 carloads of crude traveled over the nation’s railroads in the first half of 2014. Bakken crude oil is more volatile and flammable than other crude oils, as demonstrated by explosion of the CPC 1232 model tank cars.

We are very concerned that access to information about routes and cargo continue to be kept from the public and that the DOT’s final rules which were promised in January are delayed until May. Rail safety experts say that in many circumstances, all local responders would be able to do in the event of a large tank car fire is simply let it burn. But that approach would involve tremendous damage in the many densely populated areas in our region through which crude oil is now moving by rail.

The threats of derailments in cities like Baltimore are real. Two years ago a train was hit at a crossing in Baltimore County and exploded. Several years prior a train carrying hazardous chemicals derailed underground within the City, exploded, and burned for days at extremely high temperatures. Days later spilled chemicals from the derailment caused an explosion within the City’s stormwater system, launching manhole covers into the air. During the same April 2014 rain storm associated with the Lynchburg crude oil derailment and fire, a retaining wall collapsed and fell onto CSX train tracks in Baltimore, just feet from where the trains run underneath a public park and an elementary school.

“The rail companies are fighting the states to keep the information from the public. Meanwhile, these crude oil train derailments continue unabated,” said Nicholas. “All indications are that the U.S. DOT will allow transport of Bakken crude with these flawed railcars for the foreseeable future. Our Waterkeepers will continue to fight for stronger protections and the public’s right to know.”