In Virginia, both the James and Potomac Rivers are being severely impacted by coal ash pollution. Earlier this summer, the James River Association (JRA) objected to Dominion Energy’s draft permit to dewater coal ash ponds at Dominion’s Chesterfield Power Station on the Lower James River. Lower James Riverkeeper Jamie Brunkow points out in public comments that the permit fails to protect the river and its ecosystems, while threatening public health. More recently, JRA, along with Southern Environmental Law Center took samples at four locations near the Chesterfield Station. The results revealed high levels of coal ash contaminants, like zinc, nickel, copper, lead and arsenic in the water.

This month, a Virginia state board will vote on the draft permit governing the dewatering of the Chesterfield coal ash ponds. In addition, Potomac Riverkeeper Network’s challenge of the wastewater permit for Dominion’s Possum Point plant, on Quantico Creek near the Potomac River, goes to court later this month. Tests show coal ash contaminants in drinking water wells near Possum Point.

Back in 2002, Baltimore City entered into a binding agreement (a consent decree) with the U.S. Department of Justice and the Environmental Protection Agency (EPA) to fix its failing sewage system by January 2016. The agreement required Baltimore City to repair essential infrastructure in the City’s sewage system to prevent raw sewage from entering waterways and neighborhoods – bringing Baltimore City into compliance with the Clean Water Act. 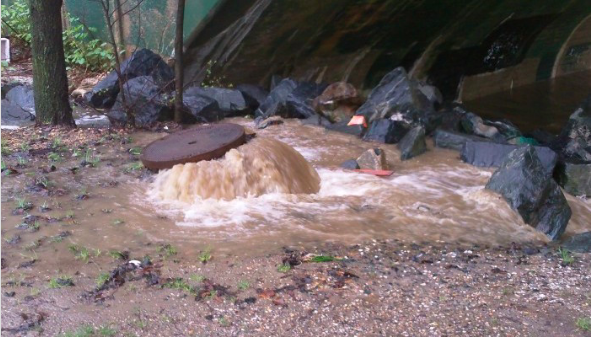 Although Baltimore City made some progress in the intervening 14 years, the city has failed to fulfill the terms of the 2002 agreement. The sewer system continues to illegally discharge millions of gallons of raw sewage into creeks and the harbor. This sewage contains harmful fecal bacteria, pathogens and industrial waste that can pollute and sicken humans, fish and aquatic life. This is simply unacceptable.

Earlier this summer, six months after the deadline, Baltimore City proposed a modification to the consent decree delaying necessary repairs another 17 years — to 2033. Waterkeepers Chesapeake submitted comments on this modified consent decree urging the City to expedite — rather than delay — efforts to get the city’s sewage outflows to come into Clean Water Act standards of compliance. With Baltimore City’s failing sewer system, aged at over 100 years old, the time has long since past for upgrades to meet the needs of an exponentially larger population. This month, Baltimore Harbor Waterkeeper was granted intervenor status in the federal consent decree lawsuit.

Sewage Problems in the Potomac and Anacostia Rivers 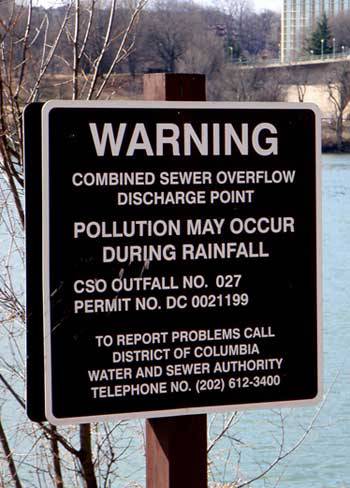 Washington D.C., like Baltimore City, has an outdated sewer system that dumps high volumes of raw, untreated sewage into local waterways whenever it rains. The high levels of E.coli in the Anacostia River, the Potomac River, Rock Creek, and their tributaries threaten public health and make it unsafe for nearly any recreational use, including boating, swimming, and fishing.

The EPA’s recent approval of the area’s “total maximum daily load” (TMDL) for E.coli does not account for short-term spikes in fecal bacteria concentrations that occur after rainfall. This violates the District’s water quality standards, and puts people at risk of serious illness. Earthjustice filed suit against the EPA on behalf of Potomac Riverkeeper Network, the Anacostia Riverkeeper, and the Kingman Park Civic Association to guarantee the safety of our waters in the D.C. area to protect the health and safety of our river users on a daily basis. 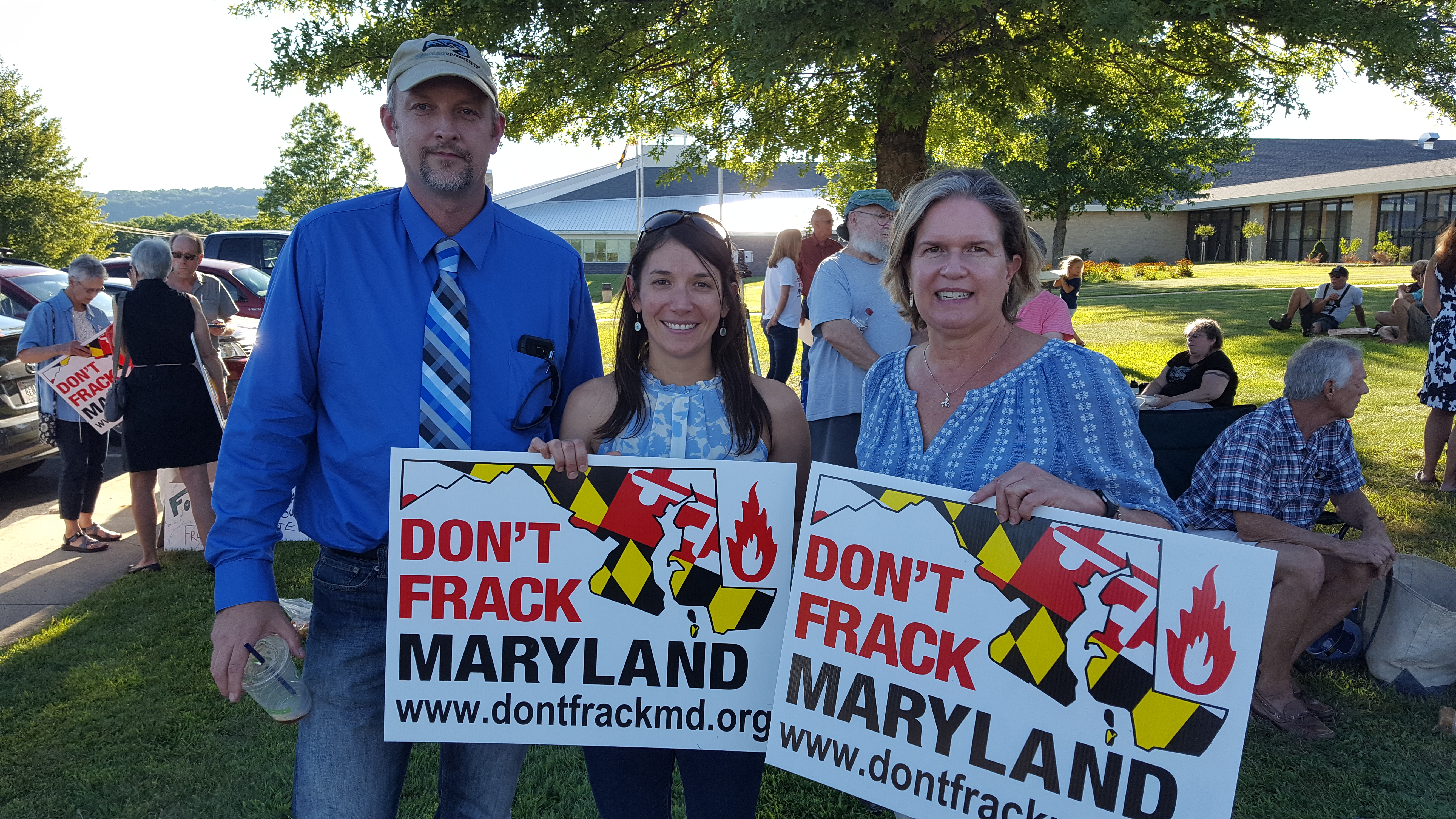 The Don’t Frack Maryland campaign is gaining steam and gearing up for a push for the Maryland Legislature to pass a statewide fracking ban during the General Assembly session beginning in January 2017.

With more and more studies being released on the public health, environmental and infrastructure threats of fracking, the Don’t Frack Maryland coalition is getting ready for a strong push for a statewide ban this upcoming session. Follow the campaign on Facebook at https://www.facebook.com/DontFrackMaryland/.

Although, by statute, the regulations for fracking must be finalized by October 1st of this year, a spokesperson for the Maryland Department of the Environment said the agency will not meet this deadline.

Atlantic Coast Pipeline Update: It takes several organizations to stop a 600 mile natural gas pipeline that will carry fracked gas from West Virginia through Virginia to North Carolina. That is why we have joined the Allegheny Blue Ridge Alliance. The Atlantic Coast Pipeline, if constructed, would negatively impact the headwaters of the James River and the Shenandoah River, threatening water quality, endangered species, and habitat.

A study released in early September found that both the Atlantic Coast and Mountain Valley pipelines are not needed – existing pipelines will be able to supply more than enough fuel for the region through 2030. The Virginia Supreme Court will hear an appeal of a ruling that pipeline surveyors could come on private property. And a recent poll shows a majority of Virginian’s disagree with Governor McAuliff’s support of this fracked gas pipeline and the disposal of coal ash that harms our rivers.

Atlantic Sunrise Pipeline Update: This summer, Waterkeepers Chesapeake joined with the Sierra Club and several other groups to file an appeal challenging Pennsylvania’s Department of Environmental Protection’s (DEP) issuance of its 401 Water Quality Certificate for the Atlantic Sunrise Pipeline. Waterkeepers Chesapeake has been actively challenging other permits for this pipeline as well.

Earlier this summer, the D.C. Circuit Court upheld the Federal Energy Regulatory Commission (FERC)’s “Finding of No Significant Impact,” with regards to the Cove Point Liquefied Natural Gas export facility on the Chesapeake Bay. The court’s decision ignored our argument that FERC needed to consider upstream impacts such as increased fracking, and new and expanded pipelines and compressor stations. Federal regulators and the court have failed to protect water quality throughout the watershed and instead are promoting the interests of the oil and gas industry. 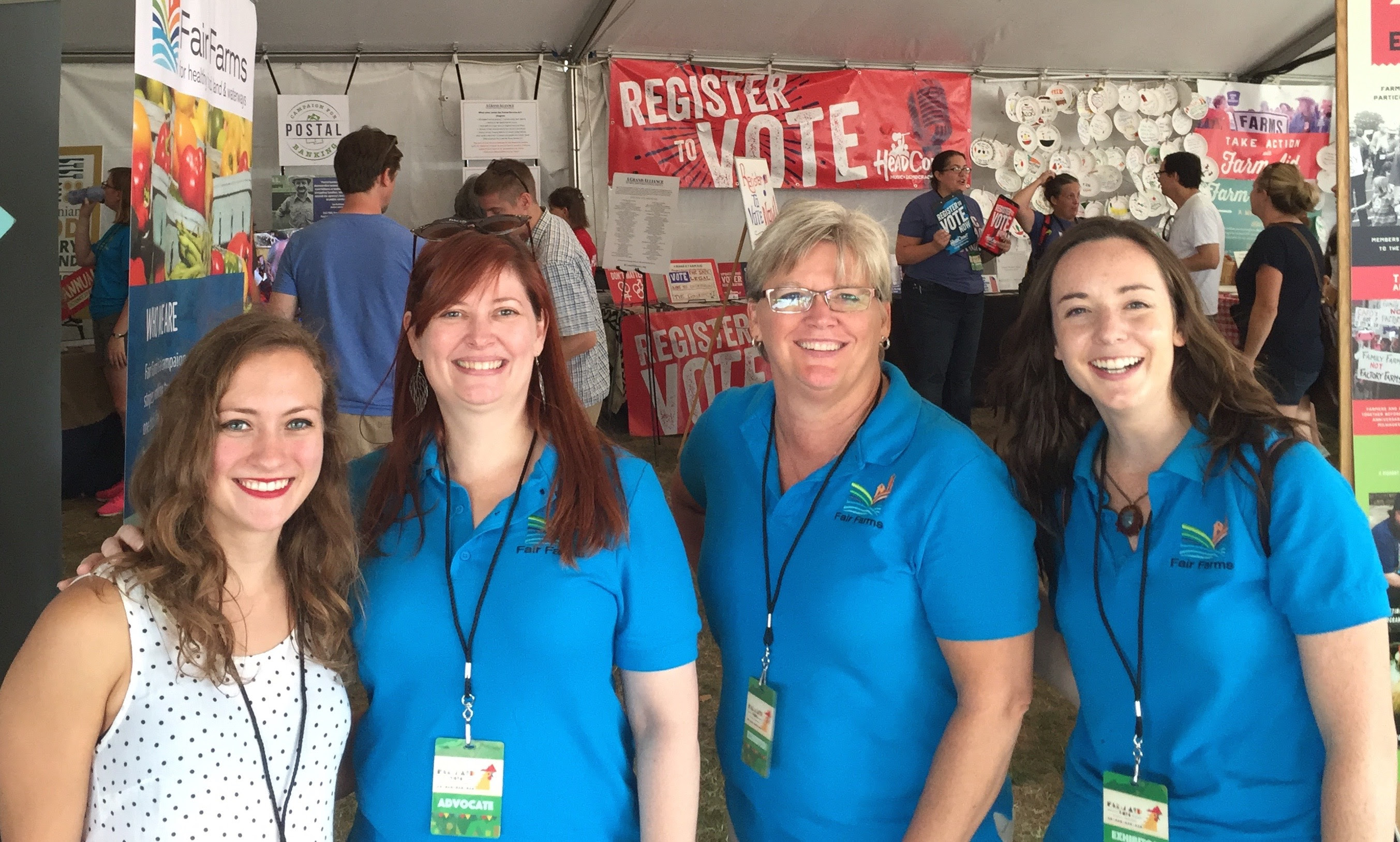 Over the past few months, our Fair Farms campaign has made tremendous headway in gaining new partners to strengthen our voice for positive, impactful food systems reform in the region. This summer alone, Fair Farms has brought on several new diverse partners.

Fair Farms hosted movie screenings and networking events for our partners and tabled at farmers markets across the state. This summer Fair Farms had the opportunity to participate in the Farm Aid – a fundraiser that attracts 20,000 concertgoers to support small family farmers. At the show, Fair Farms, along with 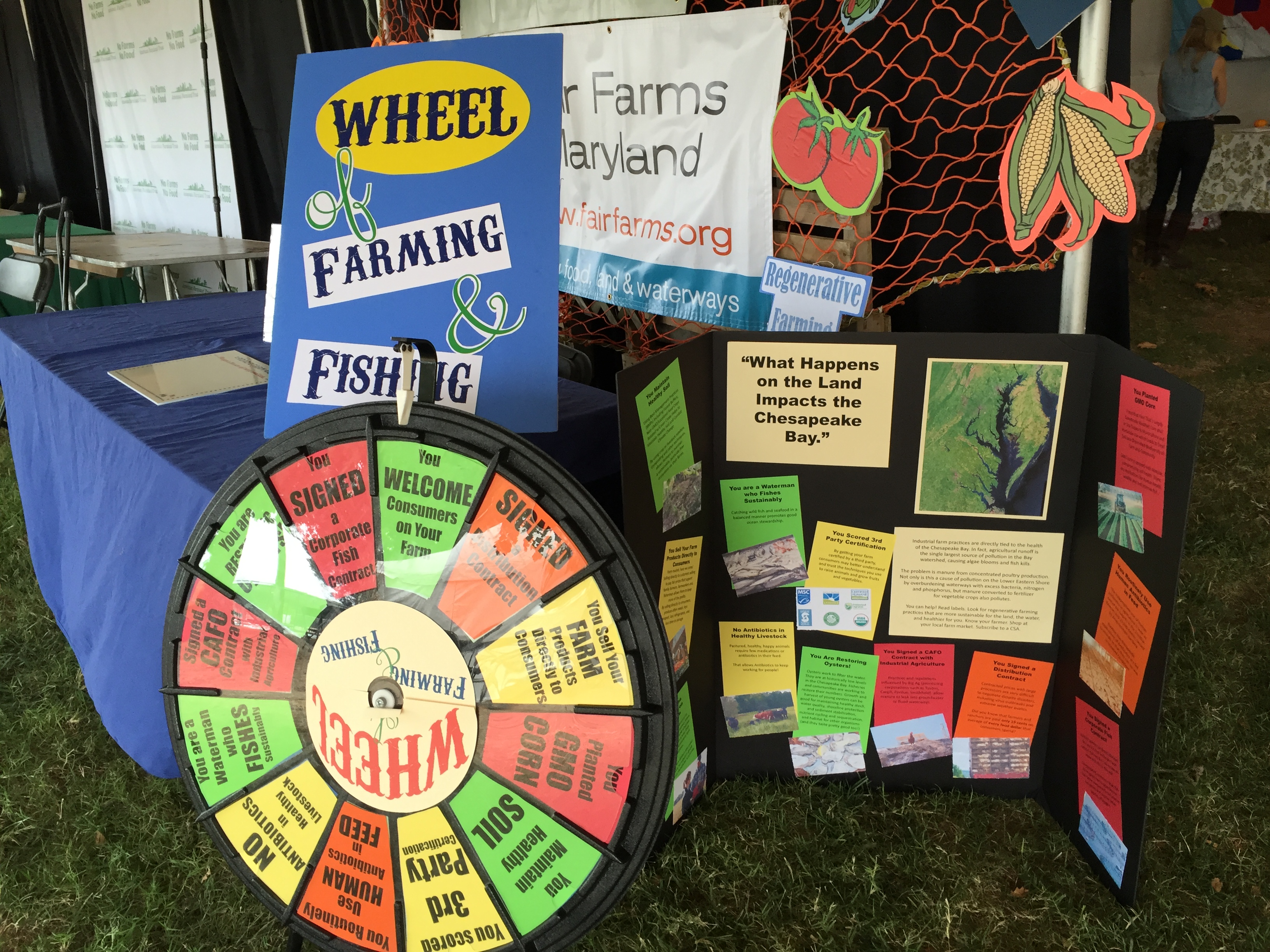 the National Family Farm Coalition and the Northwest Atlantic Marine Alliance, hosted a booth in the Homegrown Village. Farmers and watermen were on site to talk about how agriculture impacts the health of the Chesapeake Bay — and why it is important to lift the voices of family farmers who are working towards sustainability and resiliency on the land and on the water.

Buy Local Challenge: Fair Farms supported the Buy Local Challenge this summer. Buying local supports hardworking farmers in our communities instead of sending your dollars off to large industrial farm operations with no community attachment. Buying local also reduces travel time and pollution associated with shipping food long distances, and local food tastes fresher because it is not bred for a long shelf-life.

Charles County Antibiotics Forum: Did you know that 70% of all medically important antibiotics used in the United States are given to farm animals that are not even sick? Giving low doses to the entire herd on a regular basis is known to be the fastest way to produce bacterial populations that can resist antibiotics.

The recent discovery about the a “superbug” resistant to colistin, an antibiotic of last resort, is currently rocking the medical profession. This resistance gene has now been found in several U.S. communities just a few weeks after its discovery at the end of May. Fair Farms is urging policymakers at the state and federal level to take this issue seriously and eliminate the use of medically important human antibiotics in farm animals that are not sick.

This week, the United Nations took up this global health issue. In November, Fair Farms will join with public health advocates to host a forum in Charles County, MD to discuss this important topic.

Our hardworking Riverkeepers, Waterkeepers, Coastkeepers and Shorekeepers are constantly adding events to the calendar. If you’re looking for a way to enhance your involvement in the cause of swimmable, fishable, drinkable and clean water, please check out our Calendar of Events.

Keep Up to Date on Waterkeepers Chesapeake

You can find current stories about what Waterkeepers Chesapeake is doing to protect waterways in the Chesapeake region here.